“Although overall the Thailand tourism market is getting better in 2017, Bangkok luxury hotels still could not dramatically increase their rates in 2017.”

Although many foreign tourists are arriving in Thailand, less than half choose to stay in Bangkok luxury hotels

There are nine to ten Bangkok luxury hotels in the pipeline expected to be completed within the 2018–2019 period.

The average occupancy rate for all hotel grades in 1H 2018 is also on a positive trend, including for luxury hotels.

The average daily rate in the first half of 2018 may increase from the second half by around 2–5%, but Bangkok luxury hotels still cannot dramatically increase their rates in 2017

Cumulative and future supply as of 2H 2017 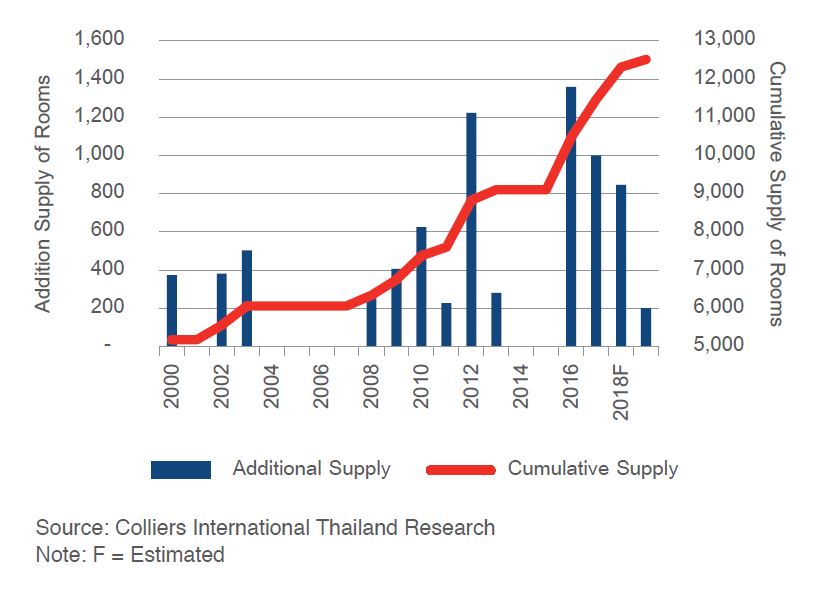 The total Bangkok luxury hotel supply as of 2H 2017 was approximately 10,689 rooms, with around 473 luxury hotel rooms scheduled to be opened in the first half of 2018.

Luxury hotels in Bangkok became more popular again in 2016, with that trend continuing in 2017 and expected beyond, after very limited new luxury hotels were added in the market between 2013 – 2015.

Approximately 2,478 luxury hotel rooms are under construction and expected to be completed in 2018–2019. Many developers are more focused on upscale hotels or lower, which have lower rates compared to luxury hotels and are suitable for independent foreign travelers. 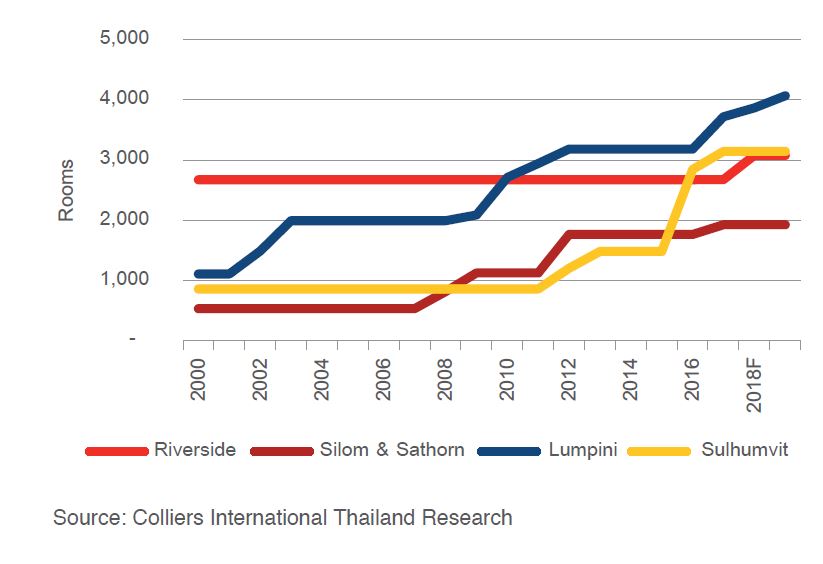 In the past, the Riverside area has been the most popular location for Bangkok luxury hotels, due to foreign tourists looking to stay in the area near the Chaophraya River and its many nearby landmarks of Thai identity. Although most luxury hotels were in Riverside area, after the BTS Skytrain opened in 1999 many hotels gradually opened in the 2001–2017 period in the Sukhumvit area.

Approximately 71% of the total of future luxury hotels in Bangkok is located in Bangkok’s centre, such as the area around Lumpini Park, Silom or Sathorn, and the Sukhumvit area. Therefore, these three locations will continue to grow in the future, especially the Lumpini area due to the many luxury hotels opening there, pushing the total number of luxury hotel rooms to 4,066.

Bangkok’s city centre is most suitable for foreign tourists, due to the many shopping malls in the area and the convenience of transportation (BTS) to other locales in the city. Therefore, most new hotels opened after 2008 have been located in Bangkok’s city centre, especially in the area around Lumpini Park. In addition, those mixed-use project in Bangkok which include, in part, a hotel, mostly have upscale and luxury hotels. 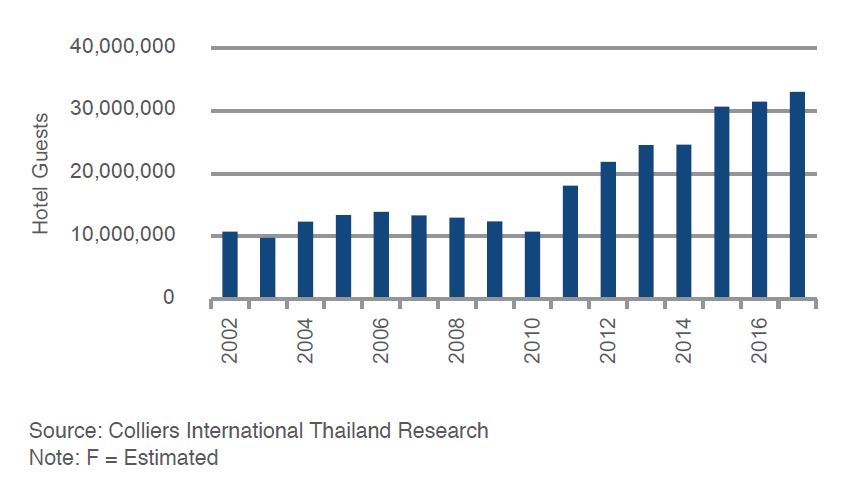 The total number of foreign tourists staying in hotels in Bangkok in 2017 was approximately 35 million. Government offices as well as hotel owners are forecasting the total number in 2018 to possibly rise above 5% from 2017. This increasing trend is due to many positive factors boosting foreign confidence, both for tourists and business persons. All luxury hotels in Bangkok are suitable for foreign business persons and investors coming to Thailand for short-term business trips.

Thailand is ideally located for all foreign tourists needing to visit ASEAN countries, both for leisure travel and business purposes. Therefore, many foreigners have used Thailand as a gateway in the past few years, and that trend will continue to grow.

In 2018, the TAT will use food as a way to draw tourists to Thailand to eat and travel and further increase tourist numbers. 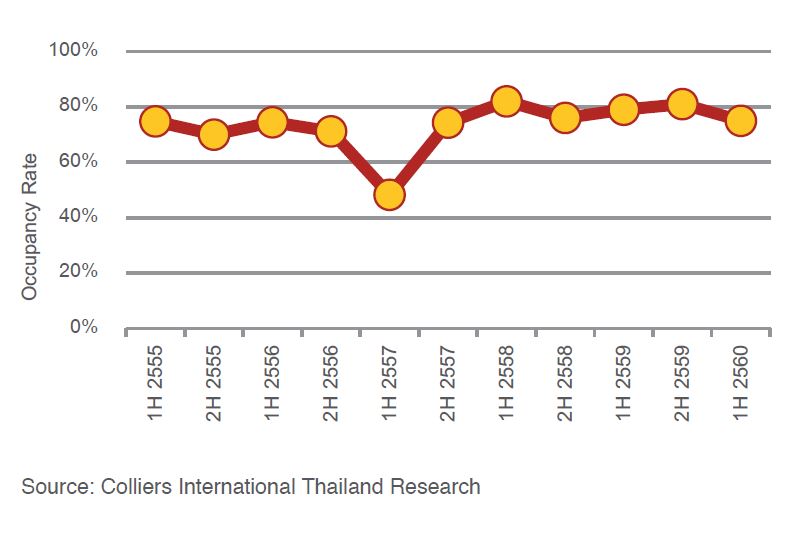 Although there’s a tendency of growth in tourists in 2017 luxury hotels are also facing increasing pressure from hotel operators, especially ones entering the market who see the opportunity to invest in the hotel business.

ADR and RevPar of all luxury hotels 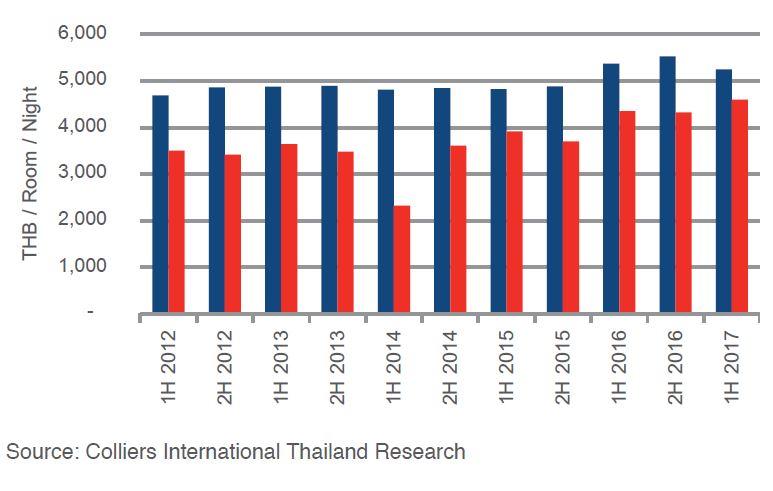 The average daily rate (ADR) of all Bangkok luxury hotels as of 2H 2017 was higher than 1H of 2017 of by around 5–7%, due to luxury hotels gradually increasing their daily rate over the past one to two years following more stability in the political arena. But the ADR for luxury hotels in Thailand is still dramatically lower than in some ASEAN countries, such as Singapore and Malaysia. Because the political situation in the past few years directly affected the daily rate, hotels in Bangkok could not increase their rates during the period of political instability.

The ADR in first half of 2018 may see an increase from the second half of 2017 by around 3–5%, depending on the tourism market, currency exchange, and internal political situation. Even though the tourism market may grow in 2018, many foreign tourists will choose not to stay in luxury hotels. Therefore, luxury hotels in Bangkok still cannot dramatically increase their rates in 2018.

The information contained herein has been obtained from sources deemed reliable. While any reasonable effort has been made to insure its accuracy, we cannot guarantee it. No responsibility is assumed for any inaccuracies.
Readers are encouraged to consult their professional advisors to acting on any of the materials contained herein.